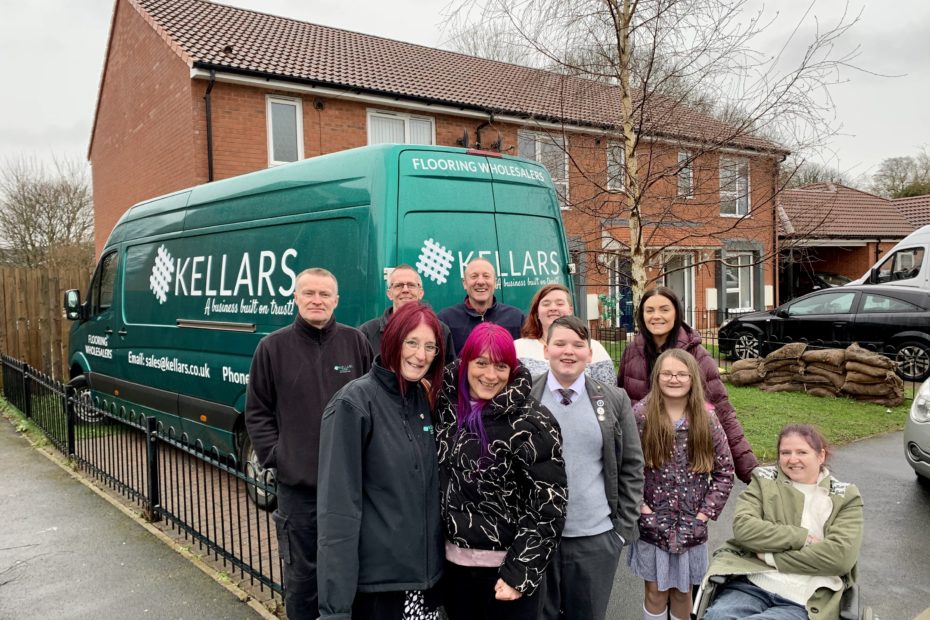 A local flooring wholesale company has rolled out the red carpet for flood-hit families moving back into their homes after being forced to leave due to considerable damage in 2019.

Residents in Sandringham Road, Cheadle Hulme, were invited to choose whatever flooring they wanted free of charge from Kellars, a company based on the Heaton Mersey Industrial Estate in Stockport.

The flooring, including carpets, laminate, underlay and fitting accessories, was delivered to the six flood-hit families on the day the residents were given the keys back to their homes recently following an extensive refurbishment by the landlord, Stockport Homes Group.

The amount of flooring donated would have cost around £4,000 but on top of that, Kellars also approached several of its fitting contractors, who agreed to donate their time free of charge to ensure the flooring is down ahead of the rest of the furniture being delivered ahead of the residents moving back in the first week of March.

Kellars Acccount Manager Wendy Gifford is a friend of one of the residents whose homes were flooded, Serena Newell.

She said: “Serena was my chief bridesmaids and is one of my best friends, so I was devastated when I discovered what had happened to her home, and the homes of her five neighbours.

“Whilst their homes were being refurbished, Serena asked whether Kellars would be able to discount flooring for the families when they moved back in, but after I spoke to the owners, they didn’t hesitate in agreeing to provide everything free of charge.

“We’re a company with a head office in Stockport which is less than four miles away from Sandringham Road, so it’s nice to have been able to make a small contribution to helping a close-knit community like this.”

Serena said all the flood-hit families had been touched by Kellars’ generosity.

She said: “When I asked Wendy about the possibility of getting a discount, I didn’t think for a minute that we would all end up getting the flooring free of charge and being able to choose the style and colours we liked.

“It’s been a horrendous seven months as we not only lost many of our possessions in the floods, but all of us were then dispersed across the area in temporary accommodation.

“But now we are all back again and we couldn’t be more grateful to Kellars for kick-starting the move in process by providing such amazing flooring.”

Serena’s neighbour, Fiona Berry, added: “The attention to detail by Kellars was amazing. We all told them what sort of flooring we would like, and in my case, I asked for grey carpet. They sent me various samples and I could have easily chosen any one of them as they were all fantastic.

“Not having to pay for the flooring means we have been able to use money elsewhere to buy other things for our homes, so we’re all very happy.”

One of the fitters donating his time for free was Jim Butler, who runs JJB Flooring.

He said: “It’s nice to help out and give something back like this because everyone needs a helping hand sometime.”

Kellars would like to thank fitters JJB Flooring, Dane Bank Flooring, Grove Carpets, Royal Flooring and Jack Dunn for providing their services free of charge, and Lizzy Shurvinton for her work in helping to find the fitters.